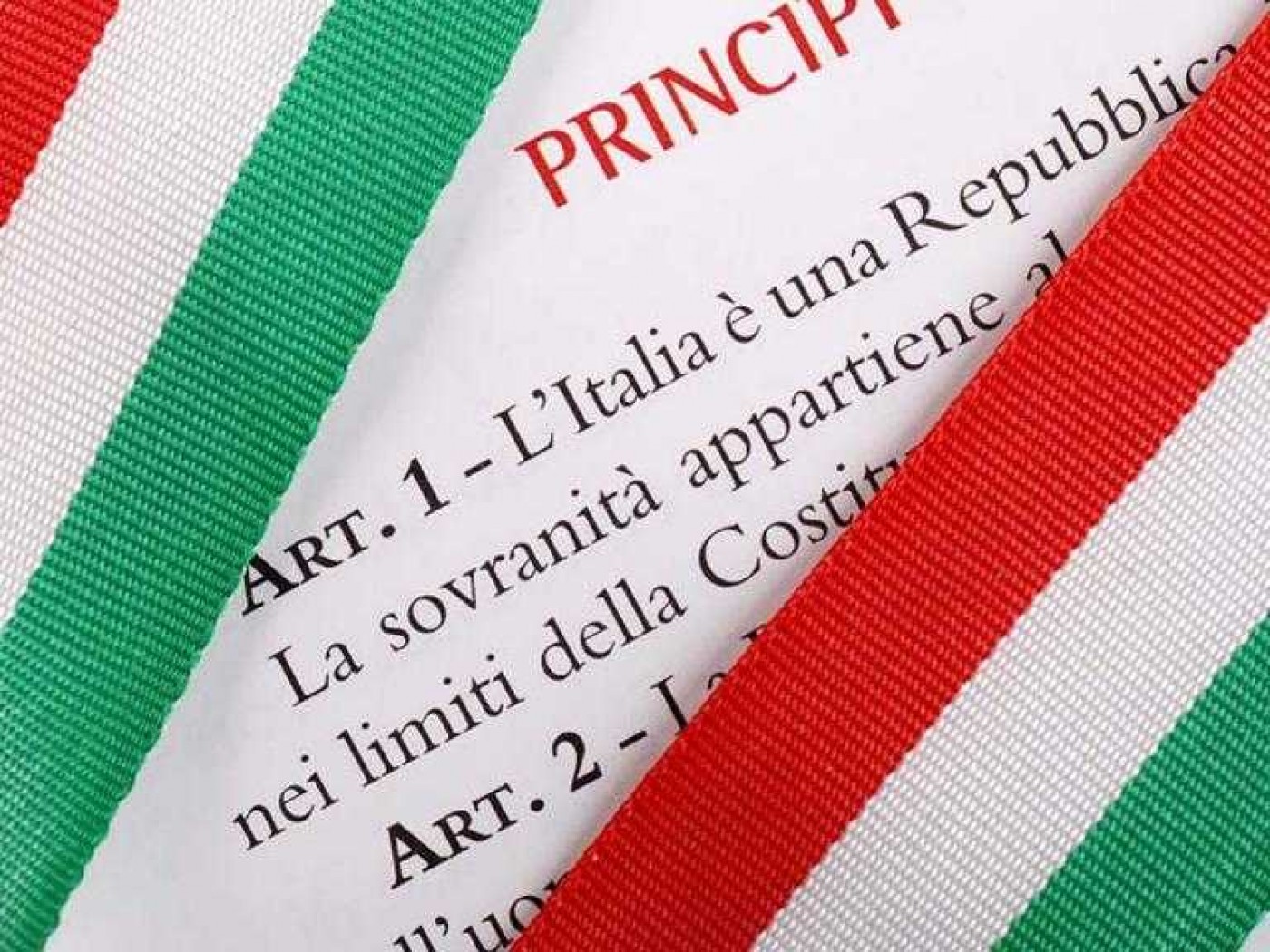 In Italy, extradition cases are handled by one of the 26 appeal Courts, "Corte di Appello", acting as first instance courts. "Estradizione Extradition Milano, estradizione Roma, estradizione Bologna, Estradizione Firenze, Estradizione Venezia" on some websites are used for search engine optimization purposes (?), but the Court location has no relevance since an Italian lawyer can practise Italian law nationwide, not just in the geographical area where the Court is located.

Don't forget to check  specific competence of the defense lawyer, because specialization even in extradition matters is not requested under Italian law (but Italian ethical rules state that "in order to assure the quality of his professional activities, a lawyer shall not accept assignment if he knows that he is not in a position to carry out the representation competently") .

Please note that within European Union the European Arrest Warrant, an arrest warrant valid throughout all member states of European Union, replaces extradition requests.  For the extradition from a foreign State to Italy, please refer to the article "Extradition to Italy".

Generally speaking, an extradition request from abroad does usually lead to the arrest of the defendant by police officers and pretrail detention is ordered by the Court: it should be noted that in case of refusal of an extradition request the defendant can claim compensation from the Italian authorities for wrongful arrest and false imprisonment.

The Italian legal system is that of a civil law State, governed by codified law.

Under italian law extradition is regulated by:

As a country with a rule of law, Italy makes extradition subject to review by the Court of Appeal as judge of first instance, which conducts a limited inquiry; it’s decision can be appealed before the High Court (see Italian extradition rules as codified in Italian criminal procedure code).

Extradition can be granted with or without extradition treaty.

The fundamental principle is that extradition follows the rules of the treaty signed with the requesting state, if there is one.

For example, extradition from Italy of an American citizen may be regulated the Treaty on Extradition between the United States of America and Italy, signed in Rome on October 13, 1983 (ratified 1984), as updated by the agreement signed following the EU-US Treaty on extradition, signed in Washington on 25 June 2003 (ratified 2009). As clearly stated by the UNITED STATES COURT OF APPEALS FOR THE THIRD CIRCUIT (No. 96-5215, MEHMET SEMIH SIDALI vs. USA), the right of a foreign sovereign to demand and obtain extradition of an accused criminal is created by treaty, and in the absence of a treaty the government has no duty to surrender a fugitive to a foreign government.

Italy has also signed some multilateral treaties, like the European Convention on Extradition (Paris, 1957).

Basically, signing states of the treaty obligate themselves to surrender an alleged criminal to a foreign state, derogating from the principle of sovereignty (which means that every state has legal authority over the people within its borders) due to the mutual trust which is expressed with the signature of a treaty.

By enacting laws or concluding treaties or agreements, countries determine the conditions under which they may entertain or deny extradition requests.

Italian Courts, and especially Italian High Court, can refuse extradition for the risk of inhuman treatment, for example due to prison conditions (some decisions are available in Italian on canestrinilex.com; please feel free to ask Att. Nicola Canestrini).

Common bars to extradition include:

These restrictions are normally clearly spelled out in the extradition treaties that a government has agreed upon.

If there isn't any treaty, extradition is still possibile under italian law and the rules of  Italian Code of Criminal Procedure will apply (articles 697 ff. criminal procedure code).

This is because the existence of an international agreement, id est a treaty, is considered sign of trust between signing member States: this is basically the reason because in case of an existing extradition treaty  between requesting state and Italy there is less discretionary power by the judge.

Extradition has to be mandatory refused with or without treaty in case of risk of  persecution or discrimination  on grounds of race, religion, sex, nationality, language, political opinions or social or personal conditions, or cruel, inhuman, degrading penalties or treatments or in any case to actions or proceedings which violate human rights of accused or convicted person.

Being recognized as refugee under Geneva Convention could be an important evidentiary element in that sense (see here for an example in a case of 2016, see hereinafter).

The refugee status recognized by a third State is not binding for Italian Courts but - due to the "principle of non refoulement" art 33 of Geneva Convention - the right of not being surrendered to a country in which someone would be in likely danger of persecution can be (successfully) invoked.

It should be considered that in particular cases it is possibile to request the suspension of extradition to the European Court of Human Rights: under Rule 39 of its Rules of Court, the Court indicate interim measures to any State party to the Convention. Interim measures are urgent measures which apply only where there is an imminent risk of irreparable harm. Such measures are decided in connection with proceedings before the Court without prejudging any subsequent decisions on the admissibility or merits of the case in question.The Court’s interim measures are sometimes the only way to make national authorities adhere to international standards and respect human rights (see more under Interim Measures instructions on the website of the ECHR).

Please note that fair trial rights could be violated in the Italian proceeding:  talking for example about right to interpretation / translation, the Italian way is .. a daily blatant violation of the defendants’ right to a fair trial.

Moreover, no guidelines have ever been provided by the
Ministry of Justice to assist the courts in how to select and work with interpreters, nor has a specific body been set up to manage court interpreting services: the absence of any system for the training, certification and accreditation of court
interpreters and the total lack of any guidelines, the result has been that the legal professionals in Italy’s courts and the courts’ administrative services have been left totally to themselves to decide on linguistic matters – how to select and work with interpreters and decide when they are needed – about which they have no knowledge or training.

"The result is, unsurprisingly, an almost totally arbitrary
approach, which varies from court to court and even from judge to judge within the same court."

Please note also that own January, 24th 2019 the European Court of Human rights unanimously found a violation of art 3 of the Convention, procedural limb, and art 6 (legal assistance and right to translation) in a famous case ("Amanda Knox case").

The case concerned proceedings leading to the conviction of Amanda Knox for malicious accusation. During a police interview on 6 November 2007 Ms Knox accused a pub manager of killing her flatmate. The man was subsequently found to be innocent and she was sentenced to three years’ imprisonment for making a malicious accusation.

More particularly, in the judgment in the case of Knox v. Italy (application no. 76577/13) the European Court of Human Rights held, unanimously, that there had been:

The Court held in particular that Ms Knox had not had the benefit of an investigation capable of shedding light on the facts and any responsibility, further to her allegation that she had been ill-treated on 6 November 2007 at a time when she had been entirely under police control. In spite of her repeated complaints, no investigation into the alleged treatment had been forthcoming.

The Court found that it did not have any evidence to show that Ms Knox had been subjected to the inhuman or degrading treatment of which she had complained.

The Court took the view that the Italian Government had not succeeded in showing that the restriction of Ms Knox’s access to a lawyer, at the police interview of 6 November 2007 at 5.45 a.m. – when there was a criminal charge against her – had not irreparably undermined the fairness of the proceedings as a whole.

The Court held that the authorities had failed to assess the conduct of the interpreter (who had seen herself as a mediator and had adopted a motherly attitude towards Ms Knox while the latter was formulating her statement), to examine whether her interpreting assistance had been consistent with the safeguards under Article 6 §§ 1 and 3 (e) of the Convention, or to consider whether that conduct had had an impact on the outcome of the criminal proceedings against Ms Knox. In the Court’s view, that initial failure had thus had repercussions for other rights and had compromised the fairness of the proceedings as a whole.

Rulings and articles on extradition are available here.

Please note that this document is intended to be a short introduction to extradition from Italy, without any ambition to be exhaustive. Note also that there exist significant problems with applying non-Italian terminology and concepts of law and justice to the Italian justice system.

In March, 2014 a UK Court has stated that "the acknowledgment of a continuing systemic problem in the Italian prison system, has rebutted the presumption of compliance with the Convention which would normally arise in the case of a member state of the Council of Europe and of the European Union. This state of affairs, therefore, raises substantial grounds for believing that there is a real risk of treatment contrary to Article 3"; please note that the remedies introduced by the italian government may have changed the situation (read more about "extradition To Italy").

In 2018, the DISTRICT COURT OF AMSTERDAM (Petition number: 18/169, Decision date: 5 April 2018), in an EAW regarding an Italian in absentia conviction of drug related crimes ruled that "the court is of the opinion that the statement of the issuing judicial authority does not comply with the requirements of article 12, opening lines and under d OLW (Dutch surrender act). 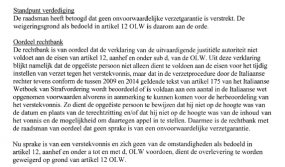 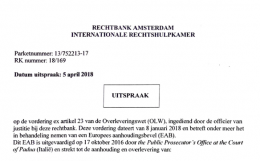 After all, this statement shows that the requested person not only has to comply with the requirements for appealing against the default judgment in good time, but that in the appeal proceedings, the Italian court also assesses, according to the text of article 175 of the Italian Code of Criminal Procedure that applied between 2009 and 2014, whether a number of conditions included in Italian law were fulfilled before deeming whether eligibility exists for re-assessment of the default judgment. For instance, the requested person has to prove that he was not informed about the date and place of the court hearing and/or that he was not informed about the contents of the ruling and the possibility of appealing against it. In fact, thus, the court agrees with the counsel, that this does not constitute unconditional guarantee of appeal.As this was a default judgment and none of the circumstances apply as defined in article 12, opening lines and under a to d incl. OLW, the surrender should be refused based on article 12 OLW."

Same decision was taken in July 2018.

(read more about "extradition To Italy").

How can an extradition request or a EAW surrender to Italy be fighted against? Some ideas and jurisprudence.

Arrest warrants from the UK are formally governed by the provisions of the Agreement on trade and cooperation.

The Italian Code of Criminal Procedure contains the rules governing criminal procedure in every court in Italy; basically, Italian criminal trial is adversarial (with an inquisitorial approach).

The Italian rules governing the retrial of in absentia convictions do not respect human dignity.

Reliance on diplomatic assurances has been a longstanding practice in extradition relations between States: but can they really be trusted?