Established 1956 in Vienna, the INTERNATIONAL CRIMINAL POLICE ORGANIZATION - INTERPOL enables police in around 190 member countries to work together "to fight international crime": more in detail, its aim is to facilitate international police cooperation even where diplomatic relations do not exist between particular countries [1].

In fact, INTERPOL is the second largest international organization in the world, only surpassed by the United Nations.

INTERPOL is vulnerable to abuse by member states, which have used its systems as a mechanism of targeting legitimate activists, journalists, and political opponents under the guise of crime fighting.

The Organization's governance is formed by the General Assembly, composed of delegates appointed by each member country, and the Executive Committee, which provides guidance and direction.

Day-to-day implementation of the Organization's strategic decisions is carried out by the General Secretariat and National Central Bureaus. The General Secretariat is located in Lyon, France, and operates 24 hours a day, 365 days a year. Beside seven regional offices across the world and a representative office at the United Nations in New York and at the European Union in Brussels, each of its 190 member countries maintains a National Central Bureau staffed by its own law enforcement officials.

Interpol, which has an annual budget of approx. € 90 million, provides a range of policing expertise and capabilities, supporting three main crime programmes:

A fast-track system, introduced in 2009, allows countries to quickly circulate information about wanted people – a useful mechanism when used properly. The introduction of this fast track system coincided with a huge jump in the number of requests: at the end of 2013 there were over 120,000 alerts in global circulation.

Notably, Interpol's Constitution specifies that international police cooperation is to be conducted within the spirit of the Universal Declaration of Human Rights.

For example, this commitment to human rights is expressed through the Organization'scooperation with international courts and tribunals and through the careful processing of personal data [3].

Moreover, INTERPOL asserts not only to refrain from any possible infringement human rights, but also to actively promote the protection of human rights, where it is deemed necessary, in the context of the Organization’s mandate.

In fact, the importance of respect for human rights have been recognized by INTERPOL since the early days of the Organization. In INTERPOL’s General Assembly Resolution no. 3 of 1949, it was emphasized that “all acts of violence or inhuman treatment, that is to say those contrary to human dignity committed by the police in the exercise of their judicial and criminal police duties, must be denounced to justice”.

This respect for human rights is now enshrined in Article 2 of INTERPOL’s Constitution, which mandates the Organization to ensure and promote international police cooperation “in the spirit of the Universal Declaration of Human Rights”

It is further emphasized in Article 2(a) of INTERPOL’s Rules on the Processing of Information, which provides that information is to be processed by the Organization or through its channels “with due respect for the basic rights of individuals in conformity with Article 2 of the Organization’s Constitution and the Universal Declaration of Human Rights” [4].

Despite that premises, there is no control about respect of basic human rights by INTERPOL's member countries.

This means that INTERPOL’s systems -particularly its international ‘wanted person’ alerts (“Red Notices”) are being (ab)used by countries around the world even in order to persecute human rights defenders, as refugees, journalists and peaceful political demonstrators, at huge personal cost to these individuals.

It has been recognized that "the governments using Interpol to pursue their opponents are at the root of the problem. But Interpol shares some of the blame for allowing itself to be manipulated. Interpol has focused on making it easier for countries to publish alerts rather than ensuring that those alerts are adequately vetted before being circulated" [4a].

In particular, Fair Trials Internationals has expressed its concern about the operation of the Commission of Control of Interpol's File (CCF), INTERPOL’s existing supervisory authority, which is the only realistic option for people subject to an INTERPOL alert to seek a remedy, campaigning for simple changes to help make INTERPOL a more effective crime-fighting tool.

Fair Trials believes that INTERPOL can and must do better at filtering out abuses of its systems before information is sent out to police forces across the globe.

When abusive ‘wanted person’ alerts do slip through the net, victims should have redress through an open and impartial process, which is not granted under actual conditions [5], since there is no effective avenue of redress for individuals targeted by Interpol and no meaningful due process allowing for the legal challenge of abusive or inaccurate Red Notices.

INTERPOL asserts immunity from the jurisdiction of any national or international court. As INTERPOL itself does not have a physical presence in most countries, national challenges to its decisions have failed due to insufficient connection between the national authority, which participates as a member of INTERPOL, and INTERPOL itself. In those countries where it does have a physical presence, such as France and the United States, INTERPOL has negotiated formal immunity [5a].

The organization exists in a legal black hole, immune to challenge in domestic courts. Its internal monitoring body, the Commission for the Control of Interpol’s Files (CCF), has previously been criticized for being underfunded, understaffed, and lacking in human rights expertise.

“[I]t is essential, if man is not to be compelled to have recourse, as a last resort, to rebellion against tyranny and oppression, that human rights should be protected by the rule of law.” (Preamble, Universal Declaration of Human Rights)

If Interpol exercised more rigor, however, the organization might succeed where international human rights protection mechanisms (and local judiciaries struggling to assert their independence) have failed, by making the pursuit of wanted persons conditional upon evidence of human rights compliance [6]. 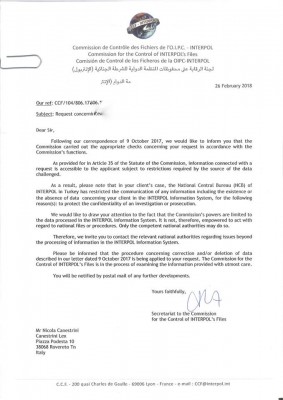 * The author is member of the Legal Expert Advisory Panel - LEAP of Fair Trials International.

[1] Article 2 of its Constitution rules as follows: “Its aims are:

(1) To ensure and promote the widest possible mutual assistance between all criminal police authorities within the limits of the laws existing in the different countries and in the spirit of the “Universal Declaration of Human Rights”;

(2) To establish and develop all institutions likely to contribute effectively to the prevention and suppression of ordinary law crimes.” Refer to http://www.interpol.int/content/download/9429/69209/version/9/file/Constitution.pdf.

[2] Source: https://www.fairtrials.org/campaigns/interpol-campaign/. It should be noted that in Italy the Red Notice is sufficient for Police to arrest the target even without any further information or even without the file!

[3] See, litterally, http://www.interpol.int/About-INTERPOL/Legal-materials. Main parts of the information about Interpol are taken from Interpols website.

[4] Remedies against unlawful entries are listed as follows on the organizarions website: “I want to modify/delete information related to me in INTERPOL’s files. Any request to modify/delete information in INTERPOL’s files is processed by the CCF. Such request should also be accompanied by a summary of the arguments in support of the request with a copy of the relevant documents if appropriate.” (http://www.interpol.int/INTERPOL-expertise/Notices/What-are-your-rights ).

[5a] "INTERPOL Red Notices: Towards Due Process and Human Rights Protection", Rebecca Schaeffer, 2013. The author adds that "Under international law, it is increasingly recognized that an organization immune from judicial oversight must provide alternative avenues of redress and effective remedies for those it affects": http://journal.georgetown.edu/interpol-red-notices-towards-due-process-and-human-rights-protection-by-rebecca-shaeffer/

"Echoes of Kadi: Reforms to Internal Remedies at INTERPOL", by Alex Tinsley (2017; download as  .pdf)

Interpol is not accountable to an international court, being a sui generis organisation. Interpol has no executive powers of its own and depends on information of its members. Hence Interpol as a legal personality is not subject to EC law. However, the national authorities of EU Member States are accountable in view of EC law. Consequently, those with a complaint against Interpol could pursue one or more of the following options: using the remedial possibilities offered by Interpol itself; addressing national authorities which, as Interpol Members, can change the functioning of Interpol and/or the way in which they treat information received through the Interpol channel; addressing national courts who can judge the way national authorities have acted on the basis of information provided through Interpol.The EU institutions have no legal competence on the subject of recognition of travel documents; this is a matter for the Member States." (see here for original link)

The article has been originally published in authors' LinkedIn profile (August, 2016). Updated October, 2016.

Italian Government has to grant compensation to victims of violent intentional crimes (CJEU, 129/19)

Each Member State has the obligation to provide a scheme on compensation to victims of violent intentional crimes committed in its territory.

Interpol red notice is sufficient for being arrested in Italy.

Italian Government has to grant compensation to victims of violent intentional crimes (CJEU, 129/19)